Origin:  The Haematococcus pluvialis algae belongs to the family of green algaes from the class of Chlorophyceae. To protect itself against UV radiation and nutrient deficiency, the microalgae produces the red pigment astaxanthin

Features:  Astaxanthin has an enormously broad spectrum of activities and is one of the strongest and most effective antioxidants and free radical scavengers, nature has to offer 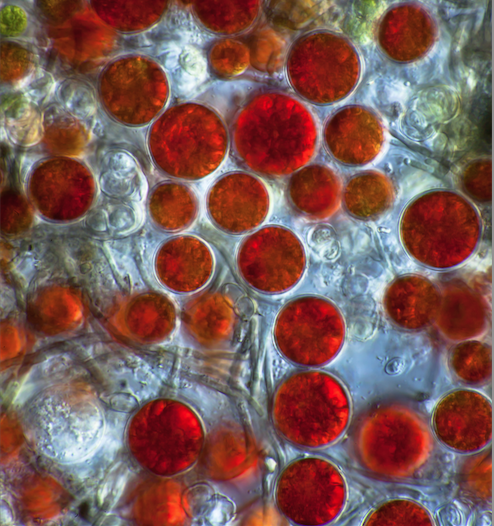 Natural Astaxanthin is produced by the microalgae Haematococcus pluvialis. It’s a relatively unknown carotenoid which is one of the most most effective antioxidants and free radical scavengers nature has to offer and acts specifically against the aging process of the skin. The special benefit of the microalgae is it’s survival mechansism: Astaxanthin serves as a force field to protect the algae from any lack of nutrition or intense sunlight and this up to a period of more than 40 years. As a protection function the algae forms a large amount of red astaxanthin. This accumulation causes the normally green algae to change color to red.

Just like in nature, this protection shield can also help protect the skin from similar radiation and conditions.

Nestled in the cellular membranes, astaxanthin protects phospholipids and other lipids brilliantly against peroxidation. One of the causes is that the astaxanthin molecule - in contrast to other carotenoids and vitamin E - extends through the entire lipid bilayer and protects both the inside and the outside of the membrane. There is evidence that Astaxanthin not only prevents UV damage, but can also help to"iron out” the external stigma of wrinkled skin from the inside and act as an internal sunscreen; it prevents the collagen aging due to UV radiation and the formation of wrinkles.

In addition, the Haematococcus algae also contains an effective natural cocktail of other antioxidants, namely lutein, beta-carotene and canthaxanthin. This is a subtlety of nature: a synergetic interaction of this antioxidants ensemble.